I went through the last Facebook paper (Carion et al., 2020), which proposes a new architecture, DETR, for object detection and segmentation based on Transformers. To better understand the paper, I decided to review the basic principles of Transformers and Attention. I am not pretending to write the best article on Transformers on the Internet. I just want to reason a bit about Transformers and maybe present the underlying ideas simply and intuitively. 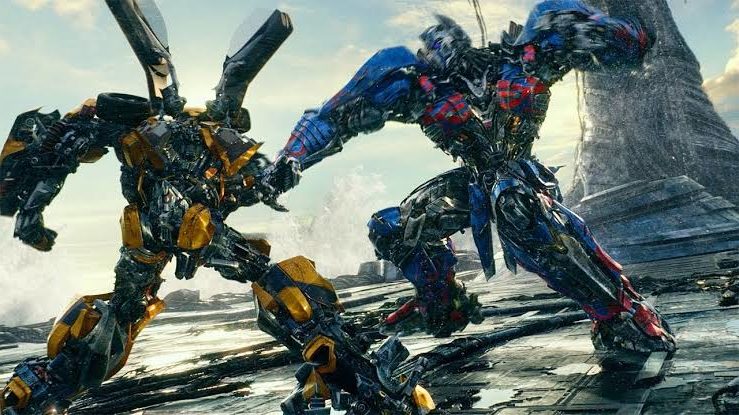 Transformers (Vaswani et al., 2017) are a deep learning architecture based on the attention mechanism. They are usually applied to sequential data in NLP tasks. Attention relates different positions of a single sequence in order to compute a meaningful representation of the sequence.

The attention function has different inputs in the form of vectors:

How to obtain a similarity (or compatibility) score?

If we have one query and multiple keys we can multiply the query vector with all keys arranged in a matrix, denoted as :

If we have multiple queries and multiple keys we can also arrange the queries in a matrix :

To understand better the attention as information retrieval mechanism, it is useful to think in these terms.

Let us say we have 3 keys, corresponding to the vectors forming angles of 0, 45 and 90 degrees. Suppose to have a query vector forming an angle of 60 degree. The keys are visualized in blue and the query in red: 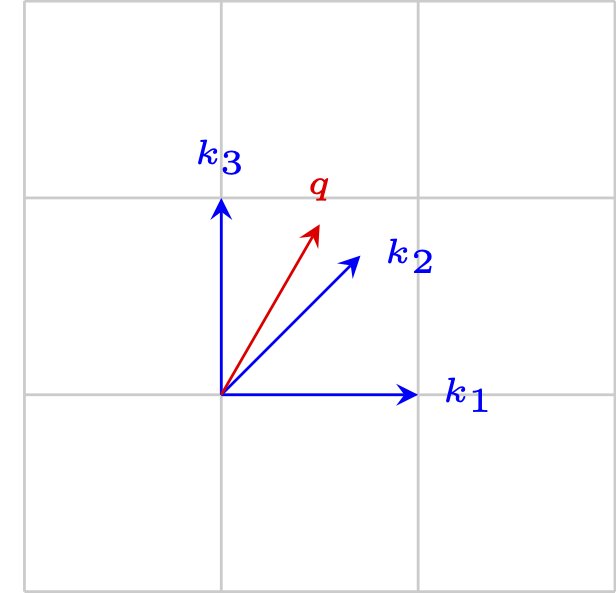 As we can see, the query is similar to keys and . To quantify the similarity, we calculate the dot product between the query and the keys matrix:

To normalize the similarity matrix, we can apply the function, obtaining the attention weights:

For larger values of , query and key dimension, the dot product grows large in magnitude and pushes the softmax (see later) in regions with small gradients. To overcome this limitation, we divide each element of the similarity matrix by , the dimension of the query and the key. The attention weights scaled are simply the weights obtained applying the softmax function to the similarity matrix scaled.

Using the softmax we find the weights associated to each value, we can then multiply the weghts by the values obtaining the attention score:

Going back to our example we can summarize the whole mechanism with the following diagram:

The Linear Projection of the keys and the query is a very important characteristic of the attention mechanism. If we keep the query and key fixed we will end up in learning nothing. A learnable projection is highly fundamental. In this way the input can adapt to the keys and can understand what is important to ask. If we think of the keys as representing attributes of the input sentence, our learned query can ask important attributes for the decoding part.

In a self-attention layer the keys, values and queries are all the same:

Linear Projection in a Self-Attention Layer

In a self-attention layer the linear projection becomes more important. If we compute the self-attention using only the embedding we would only use the similarity defined by the embedding. Using a linear projection we let the embedding to adapt to the specific task. In this way the similarity between inputs can be learned during training. At the same time, learning values can be beneficial as they represent important attributes of the input.

The Transformer model is made of two parts: an Encoder and a Decoder.

The Encoder is a stack of N blocks. Each block is made of two layers:

The Encoder takes the inputs, and it converts it into a latent representation. In the context of NLP, the inputs are the tokenized words projected into an embedding.

A position-wise FFN is a FFN applied to each position in an independent way. Across the same layer, the parameters are shared. This is equivalent to a convolution with kernel size 1.

The decoder is a stack of N blocks. Each block is composed of:

Similarly to the encoder, the decoder uses Residual connections and Layer Normalization.

In a Machine Translation task, the decoder generates token sequentially like an autoregressive model. It starts from the initial token, and it generates a distribution over the next token. The token associated with the highest probability is selected and fed again in the decoder. During this process, the decoder can attend at each position of the output generate up to the current one.

There are three different attention applications in the transformer model:

The transformer model contains no information about the element position. The inputs are fed into the encoder without keeping the structure in the sentence. Positional-encoding is a rather simple trick to help the network to understand the order of tokens in the sequence. Positional encoding can be learned or fixed.

The paper uses trigonometric functions of different frequencies to encode each position in a differentiable manner:

where is the position and is the dimension. Each dimension of the positional encoding corresponds to a sinusoid. 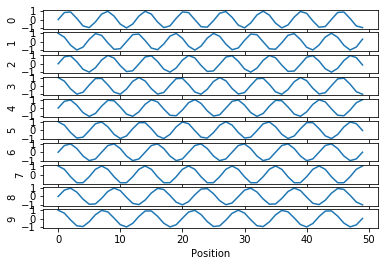 For the sake of visualization, we can arrange the positional encodings in a grid obtaining the following plot:

Prior to Transformers, the most used architecture for sequence to sequence learning was the LSTM (Hochreiter & Schmidhuber, 1997). It is beneficial to understand the differences between these two architectures.

In an LSTM, the input is analyzed in a sequential fashion, starting from the first token and going on. It is also possible to use a Bidirectional LSTM that analyzes the input from both directions (forward and backward).

The transformer processes each input token at the same. Transformers exploit the positional encoding to understand the input structure.

In an LSTM, the path from an input token to the output depends on the position of the token. The input token goes through a sequence of transformations before being projected in the latent representation. In an LSTM layer, there are sequential operations, where denotes the sequence length. The number of operations that connects two input positions is proportional to their distance in the sentence.

In a Transformer, the path from an input token to the output is shorter, and it does not depend on the input length. This allows transformers to be able to process longer sequences. In an self-attention layer, there is a constant number of sequential operations, not depending on the sequence length. In addition, in a self-attention layer, each input position is connected to the other positions through a single operation.

The output generation of LSTM and Transformer is very similar. Both generate token sequentially, and the current generated token is used to predict the next token.

Self-Attention Generative Adversarial Networks {$ cite Han18 %} employ the Self-Attention mechanism to use global information both in the generator and in the discriminator. GANs are usually based on convolutional building blocks, that